One of the subscribers to the New Canaan Market Report for October asked for a Wilton report.

There is no such thing. So, I am going to write one right here, right now. First, here is a chart of the amount of inventory in Wilton over the last five years. With the exception of spikes in the beginning of 2012 and again in 2016 it would appear we are at more normal levels of 9-15 months of inventory. 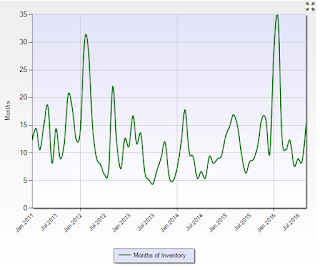 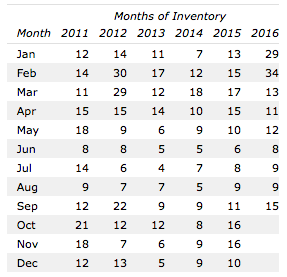 I think Wilton represents great value in comparison to New Canaan, Westport, Darien and Greenwich. If you assume the schools are equal the difference in price should correspond to the higher taxes and longer commute to New York City. Historically that has accounted for a 40% (or less) difference in values. However, currently the Wilton market is selling at a 45% discount to the New Canaan and Darien markets.