Skip to content
First, notice how few listings there are at the end of January 2017. At the end of January we were down to a more reasonable 203 houses on the market, (still a bit higher than the 187 that sold during all of 2016) but down from the 225 exactly one year ago. 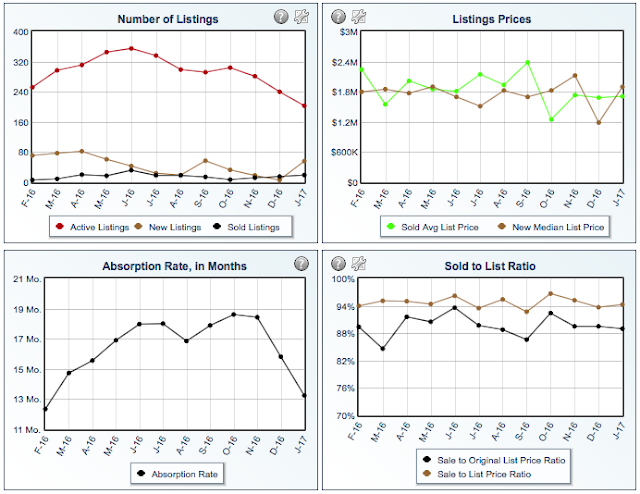 The absorption rate is at 12-13 months, up from 10-11 months a year ago. We can attribute this to a slow start in sales to 2017, despite all the positive momentum realtors seem to be feeling and reporting. That’s right, we only had 19 sales in the month of January, up from 16 in January 2016 so it is too early to say we are in a recovery. Also, it is worth noting that those 19 sales were sold at the median price of $1.4 million which represents a 28% drop from the median price a year ago.

Days on market is dropping, however, and that is always a welcome trend. That tells us that the gap between buyer and seller expectation is narrowing. Either sellers are getting more realistic about pricing their houses or buyers are responding to the thinner inventory and coming up to meet them. Sold to list price ratio is holding steady at a fairly typical 94% which means the market is returning to a more balanced state.