The number of sales is down 23.8% this year in New Canaan, 96 versus 126 last year.
If we go back 3 years we see sales of 100 and 119. In that context 96 is not nearly so alarming.
Zillow calls it a “buyer’s market” saying home values have declined 1.3% in the last year.
Zillow predicts that they will rise 1.4% in the next year. For the last several years Zillow has been predicting a flat market, neither appreciating or depreciating. And they are mostly right. 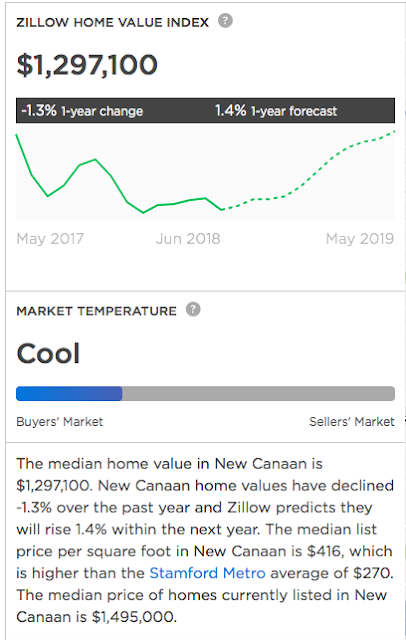 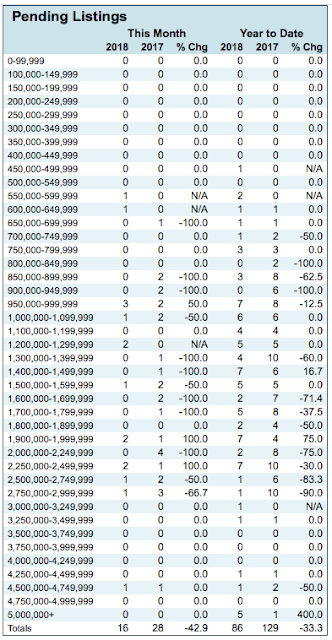 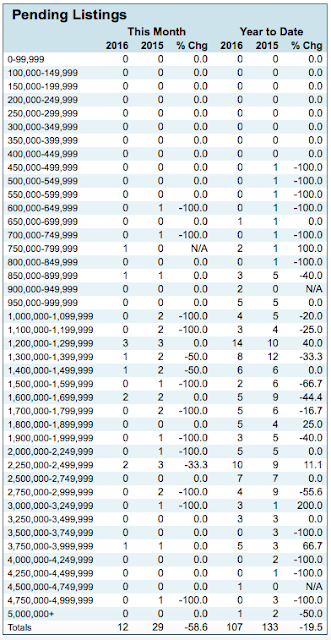 The number of pending sales is down 33.3% this year at 86 versus 129 a year ago. We saw 107 pending sales in 2017 and 133 pending sales in 2015. This is significantly lower than the previous three years and this is troubling. Pending sales is our best forward indicator, deals that are in the pipeline but not yet closed. Slowing pendings combined with slow sales means momentum is slowing as we head into the Fall market.
The number of listings has not changed, peaking around 349 which is up 9% from last year but unchanged from two years ago. Zillow says there are currently 423 homes for sale, prompting people to say “What’s wrong with New Canaan?” Too much focus has been made on the number of listings and days on market. More and more often people are putting their homes on the market with the expectation that it may take 2 years to sell. They put it on the market while they still have children in the high school saying if it sells too soon they will just rent. New Canaan is at a significantly higher price point than some of the neighboring towns and we accept the fact that it takes longer to sell a house in a town where the average price has always been over $1.5 million. (Currently Zillow says the median asking price is $1.5 million, down from the 10 year high of $2.19 million in January 2015 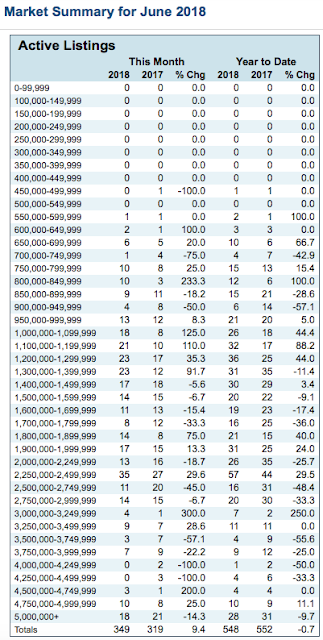 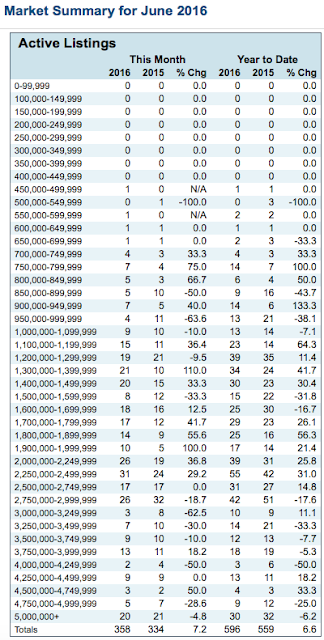 I can think of 5 clients in New Canaan at the top of the market, $4 million or more, who all accept that it may take a couple years to sell their homes. Therefore, they put their houses on sooner than they would have a few years ago. They are building in a cushion of time. That is why we see Absorption Rates and Days on Market levels much higher than the historical averages. Sellers all remind me that they do not have to sell, that they would simply prefer to downsize (in the New Canaan market where they have roots) and spend a portion of the year somewhere else. The psychology “do not have to sell” is very different from previous recessions where sellers were over-leveraged and had to sell, or where there were no sales such as in January 2009. 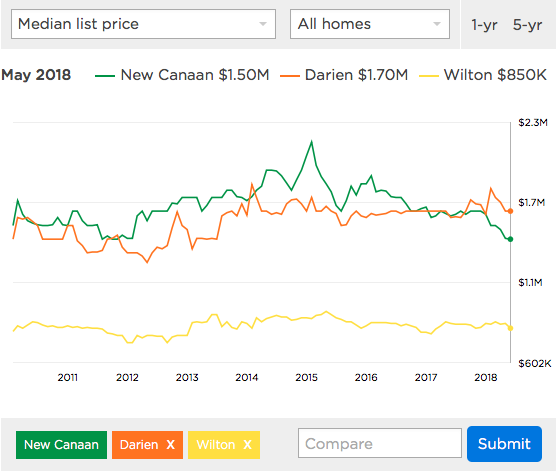 How is the market?
First of all, there is more than one “market” in New Canaan and we can’t paint them all with one brush. In fact, I would say that in some categories the market is quite brisk with a ton of demand. I’ll outline 5 categories and how they are doing right now and why:
1.  Antiques. The market for vintage houses and antiques that have been restored to modern standards can be quite strong. Of course, it can depend on factors like location and quality of the lot. But, several excellent examples have experienced bidding wars and have sold close or even above their asking prices.
2.  Mid-Century moderns. The market for moderns is also strong, relatively speaking. The sales of a few notable examples such as the Frank Lloyd Wright house, the Breuer House and the Willis Mills House demonstrate continued demand for these unique, high-style houses. God and the Harvard Five aren’t making any more mid-century moderns and so scarcity continues to drive this market. There are some stunning examples that have not sold and so it is not to say they all sell immediately. But, in my analysis of the last two dozen sales of mid-century moderns I find that they are selling at a higher multiple of their assessments than the broader market. 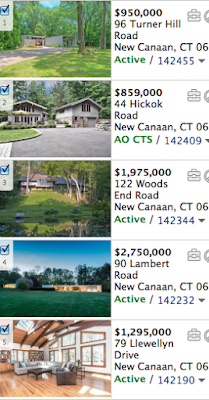 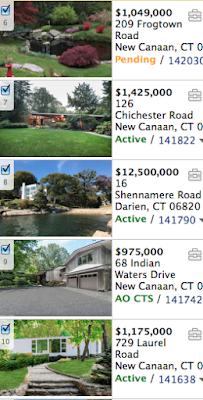 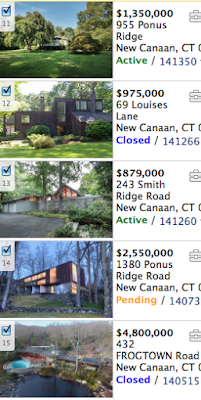 3.  New Construction. There are currently 27 new houses on the market in New Canaan ranging from $6.45 million to as little as $1.35 million.  One was first listed in October 2014.  Over 1300 days on the market! That is a patient seller.  But, he is not the most patient. There is one (out-of-town) builder who has been trying to sell his house for 10 years. There is no record of it ever renting and it has been on the market almost continuously since 2008. It is being offered today at the same price it was offered in 2008.
4.  In Town. There are currently 24 houses offered for sale within half a mile of the train station. They range from $689,000 to $3.2 million and date from 1810 to new construction. The smallest lot is less than a tenth of an acre while the largest is nearly an acre downtown. This category is doing well and will continue to do well because access to the village and a favorable commute are a big draw for an increasing number of buyers.
5. Condominiums. At this time of the year there is always a lot of hand-wringing about the condo market and a perception that condos are not selling. The sellers are beginning to get anxious that they missed the Spring market and they are ready to make deals. There is no Spring market for condos because condos sell equally well in October, February and July. I think that the condo market is somewhat dependent on the sale of houses but not entirely. People buy condos for many many reasons and they do it all year long. This year we have sold 26 condos versus 29 last year. There are 28 pending versus 29 last year. There are 98 active listings versus 102 last year. The absorption rate is 12.4 months versus 12.2 last year. And the average and median price is within $10,000 of where it was a year ago. All in all a remarkably consistent market on track to sell 48-49 condos again this year just as we did the last two years. 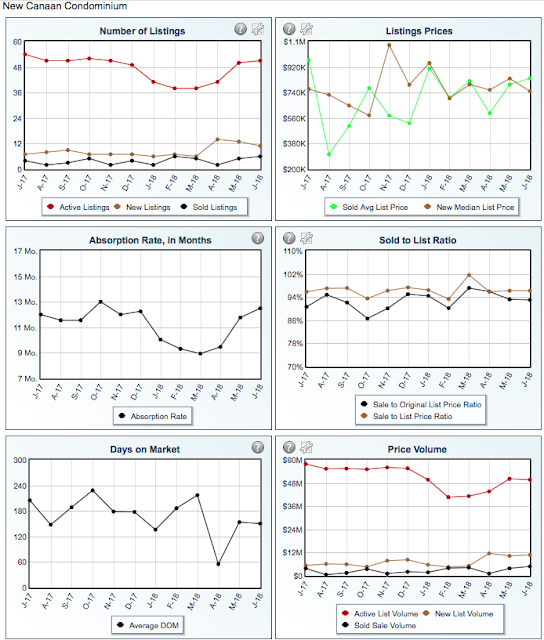